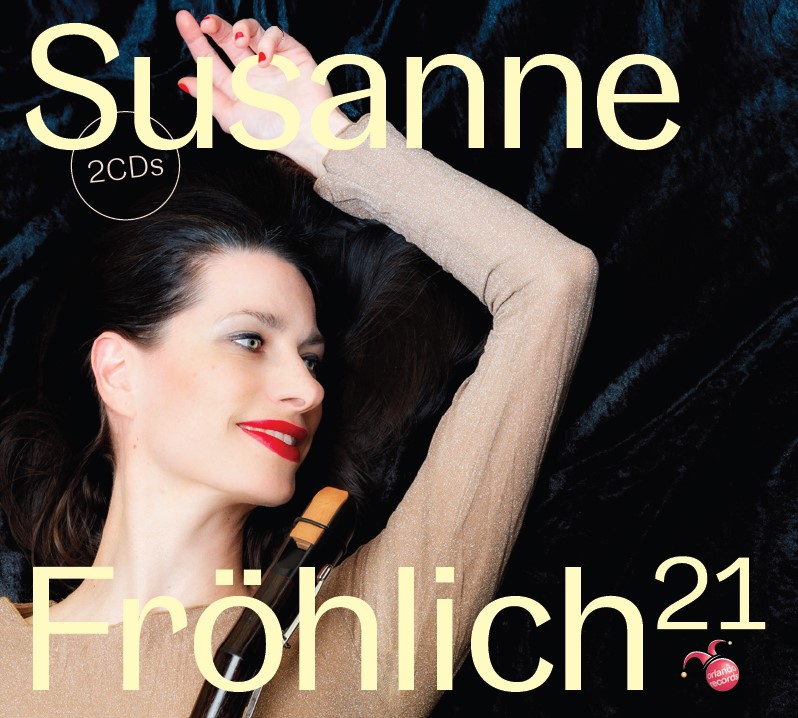 I am very happy and excited to present my solo debut album, which was released on the Austrian Label Orlando Records this month. It is called Susanne Fröhlich21 and is very much about the new sound world and new potential of a contemporary recorder I have been exploring in the past few years. This instrument is called a Helder Tenor and I have explained already many details of this special instrument on my blog. In short, the Helder Tenor was developed by the Dutch recorder maker Maarten Helder in the early 1990s. At that time the focus was very much on performing on copies of historic recorder models. Maarten’s goal, however, was to set a new standard in recorder making and to bring a new dimension into recorder performance practice. Although his ideas were brilliant and opened up a new and contemporary sound world on the recorder, I realized that these special features were technically not yet mature. So, on this album I am mainly presenting a further developed version of the Helder Tenor. It was built in close collaboration with recorder company Mollenhauer and their innovative recorder developer Erik Jahn. You can find many details of both instruments in my thesis, which formed part of my doctoral studies at the University of Music and Performing Arts in Graz. However, this album is very much about letting you experience these two truly contemporary recorders.

The first piece is part of a series of several solo instrumental pieces from the 1980s called RSRCH. In these pieces the Canadian composer and recorder player Peter Hannan focused on one specific aspect of new instrumental playing techniques. RSRCH 12/84 is written for a tenor recorder and completely dedicated to multiphonics, exploring their quality, strength, and fragility. In the beginning of the piece the multiphonics are introduced carefully. The main part plays with rapid virtuosic changes, from natural sounds to multiphonics and back again. This creates a polyphony on a monophonic instrument in such a fascinating way that it puts both audience and performer into a kind of trance. Thus, also the subtitle Dream. Performed on a baroque recorder, the piece becomes groovy, dream-like minimal music. My interpretation on the Helder Tenor is a rather intense ride through trials and tribulations of a dream, almost like a race with my own breath until the grand finale. I am performing this piece on the standard version because of a new block which has been designed for me. It is made from modeling resin for a rough sound quality, which fits very nicely to my interpretation. Besides that, I really liked the multiphonic on the low c on that instrument.

Beast Calls: Susi Spinus was written for me by the Canadian composer and recorder player Terri Hron. It is part of a series of works that is inspired by recordings Terri has made of animals. In this piece she has chosen Siskins, which are birds from the Spinus genus. My instrumental part features new sound possibilities of the Helder-Jahn Tenor, which I have been exploring in the past year. They include lip vibrato, quiet multiphonics and white noise tones, complex timbres and varieties of tone that do not exist on traditional recorders. For the electronic part, Terri used recordings of siskins as well as transformations of my own improvisation samples, bridging the sound of the live-recorder and the aviary.

In the past few years, German composer Kathrin A. Denner wrote a cycle of solo compositions called engrave. The pieces are written for different instruments, exploring the various possibilities of expression of each instrument. The title refers to the musical material being used, which rotates around itself, stays with itself, develops slowly and is engraved into the memory with many gestural repetitions. Number V was written specifically for the Helder Tenor in collaboration with German recorder player Carolin Elena Fischer. Regarding dynamics and timbre, the piece demands a lot from both instrument and performer. For the general “sotto voce” character, I am experimenting with different block positions and special playing techniques with lip control. But always keeping in mind the third octave, which is performed here mainly in pianissimo and therefore can only be played in certain block positions.

The visitor of the Idyll is part of a cycle of solo pieces, which are considered a classic in the recorder repertoire, but also present recorder players with great challenges. In 1993, the Korean composer Isang Yun wrote this cycle called The Chinese Pictures for the Dutch recorder player Walter van Hauwe. It consists of four very different pieces that Isang Yun composed without an actual idea of ​​a specific recorder model. He left it to Walter to decide which instruments to use for the premiere. However, they are selected by the performer depending on the scope and musical material. As far as the dynamics are concerned, especially in the lowest register, The Visitor of the Idyll is extremely unfavorable for a regular tenor recorder. There are, in fact, recorder players who, for that reason, have decided not to play this piece anymore. With the Helder-Jahn Tenor and its new foot joint I am much more confident performing this piece now, as I can actually implement what is written in the score.

The final piece on this album is called Semaphor. It is a spatial sound composition and the title refers to a visual telegraphy system transmitting information from one tower to another. It was developed together with the German composer Gerriet K. Sharma for two pioneering instruments: the Helder-Jahn Tenor and the Icosahedral loudspeaker. This is a unique sound projecting instrument developed at the Institute of electronic music and acoustics in Graz. The musical material I am using here on the Helder-Jahn Tenor is very much inspired by Gerriet’s electronic music. It is literally turning the usual sound world of the recorder upside down, including for example very soft pitches in the third octave, harmonic overblows and granular tones. It was quite a challenge for us to make a recording which meets the requirements of such a spatial piece, presenting both depth and dimension. So, we have been working with two recording systems: On the first CD you find the stereo version with a slightly reduced dynamic range of 50 decibel. On the second CD you find the same musical version but with original dynamics and recorded with the binaural recording system. To fully perceive and enjoy the spatiality of this composition, one has to listen via headphones then.

If you are interested in this album, you can order it via Orlando Records and any other store (from 6th of October on) or directly via susannefroehlich1979@gmail.com.

Looking forward to hear from you!