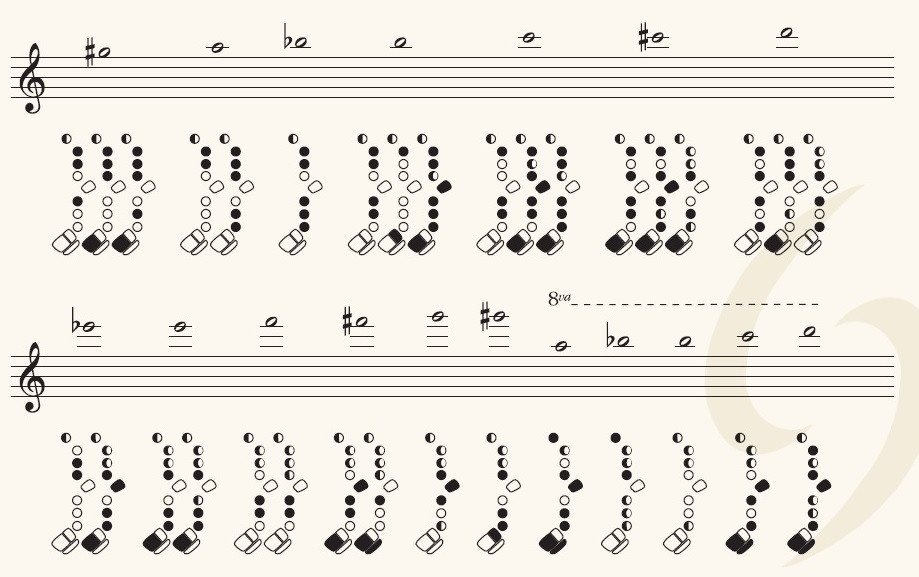 As Silvestro Ganassi already wrote in his treatise in 1535[2]: „Should you happen to come across recorders that are incorrectly voiced, or in an unusual way, you should proceed as every experienced lute player does who, when he finds himself obliged to play on a strange lute; he examines it thoroughly in every respect. Should he find a false string, he does the best he can by re-tuning or by using other fingering. You should do likewise. Should you have to play a recorder made by a master who is unknown to you, proceed as I show you in the following diagrams. Should you still be unsuccessful in any of these ways, you should try opening and closing one or two holes a little more or a little less, and you should also regulate the force of your breath. In this way, you will find out how to play any kind of recorder. As well you know, when Nature cannot help, Art must be your teacher.”

The Helder Tenor is based on pure harmonics and therefore works a lot with shadowed fingerings in the 3rd octave. This principle is not at all some sort of side appearance and was mentioned in treatises for recorder[3] as well as other woodwind instruments[4] long before. The main goal also then was, to facilitate the attack and to guarantee a well-balanced sound quality in the 3rd octave. This means, that one doesn’t need to force his or her way up to higher registers through extreme air pressure[5].

The following three fingering charts, which I have worked on in the last view months, are suggestions for standard fingerings, dynamic fingerings (for piano and forte[6]) and Lip-control fingerings (for pianissimo in the 3rd octave). They will give you an idea, how far you can go on the Helder Tenor and of course can help you find even more fingerings. The position of the block has a lot of impact on the attack as well as on the sound quality of each note. Therefore, you need to know that these fingering charts are made for a standard block position. From there you can take it further and experiment with different positions. You probably will realize that e.g. a narrow wind channel will create a lot of disturbance in the 3rd octave, whilst a wide wind channel will create a quite easy and fluty sound in the 3rd octave, but only reaching up to approximately B’’’. Although the Helder Tenor comes with three different materials of platelets for the windway roof, I am mainly using the Synpor platelet. This material can absorb fluids while not expanding at the same time. This is quite some advantage, since there is less limitation on performing and studying this instrument time wise than e.g. with one of the two wooden platelets. They are made of Grenadilla and Rosewood – both noble woods – and they of course do expend while playing and therefore have limitation time wise, but also sound wise.

8 = B-key = left pinkie finger – be aware that 8 normally equals the bottom hole; since the Helder Tenor has an extension note and therefore one extra key before the bottom hole, we should keep numbers in the correct order.

[6] With special thanx to Johannes Fischer, who introduced me to these fingerings.